After racking up nearly 2000 miles on our last road trip, the thought of heading on another loop was becoming less appealing. Instead of the original plan to head to Oregon and Seattle, we decided to spend our last couple of weeks making the most of the Bay Area. Considering how long we’ve been in the States already, we’ve only been into San Francisco a handful of times and there’s still a lot of the Schoensteins to see.

Rather than ramble on about every activity we managed to squeeze into the rest of our time in the bay, we’ve made a note of our highlights….

Fleet Week
California generally has a laid back vibe so apart from a glimpse at baseball and football games, we were yet to see some pure Americana. Fleet Week delivered in full force and even we were cheering along. Mark and Cheryl’s yacht club neighbours took us out on their party boat to see the show. The guy behind the wheel was a pro and managed to get us in the right spot every time for the flyovers, the noise of the Blue Angels going over our heads made every bone in my body vibrate. It was incredible. 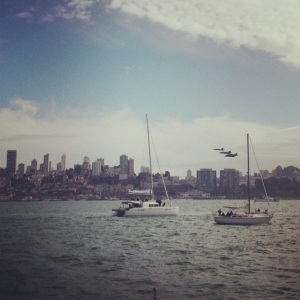 Mark’s Magical Tour
This was our first chance to do all the touristy sights of the city in one day. Starting out at Crissy Field, Mark showed us the highlights of San Francisco in his famous magical tour. We explored one half by car and the rest on foot, ticking all the checklists of Lombard Street, Chinatown, the Schoenstein Organ Factory, Coit Tower, the list goes on. It was fantastic to see the ins and outs of this quirky city and we finished it with a drink from the top of the Hyatt and amazing views over the streets we were just exploring. 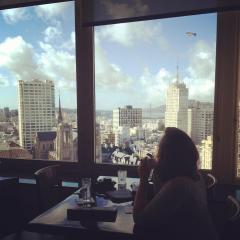 After Mark’s tour we were left to our own devices and spent some time in the city on our own. We visited the Grace Cathedral, Alcatraz, had coffee in Haight Ashbury, burritos in the Mission, martinis at the Mark and watched the Giants make their way into the World Series.

Chung Yeung
Our top spot of the trip so far has been Half Moon Bay, we’ve developed a little ritual of getting a sandwich, taking it to the beach and spending an hour at the driving range afterwards. It’s so relaxing down there and the sea air and sunshine is unlike anything you’ll get back home. We’d noticed a sign for kite demonstrations so followed it to find out what it was about. Turns out it was Chung Yeung, the Chinese celebration of the dead, where they honour the deceased with food offerings and kite flying. When we got there the skies were filled with giant octopus and dragon kites and we were each given a mini one to fly ourselves. We felt like big kids and spent hours seeing who could get theirs the highest.

Grand National Rodeo
So no matter how many baseball games we’d watched, Fleet Week planes we’d cheered, nothing could compare us for Americana in the form of the Grand National Rodeo. At the Cow Palace, when they’re not holding X Factor auditions, they’re host to the championships. Much to Mark’s amusement, I thought we were in for a night of mechanical bull riding. We weren’t. At all. Instead we were watching men jump off a horse at 25mph and wrestle a baby bull to the ground, twisting it’s neck until it looked like it’d snap. After the third “Who here is from Texas?” and second procession of ‘Miss Rodeo’, we decided maybe it wasn’t our scene. Not before watching the singer of the national anthem nearly get bucked off and try to ignore the horse weeing everywhere.

Sonoma
Better late than never we made it to the Wine Country on our last day. We avoided the tourist area of Napa Valley and instead followed some recommendations to Sonoma. We put on our posh voices and did a couple of tastings. I felt as though I was wearing a big sign saying ‘Sometimes buys £2.99 wine from Aldi’. It was lush and we drove back through the countryside, over the Golden Gate Bridge with the sun setting over San Francisco – the perfect send off to California.

After two months here, we’d started to feel settled. We could make our way around the city without a map and the Bay Area was beginning to feel like home. I was more sad than I thought I would be to say goodbye. The Schoensteins have been more than generous and welcomed me as if I have always been a part of the family. I’m sure it’s not going to be our last trip to the Foggy City.